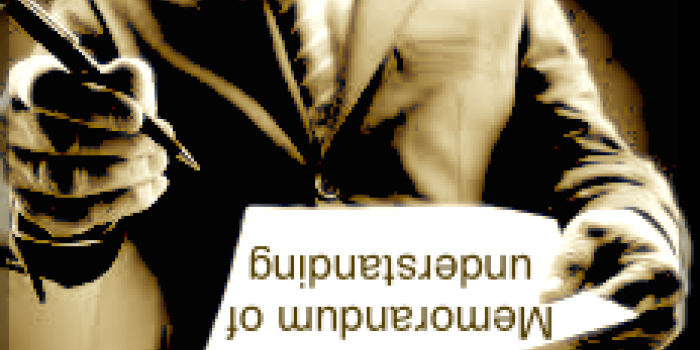 When two entrepreneurs begin to deal, trying to end a deal, talk, exchange messages, fax and e-mail, make phone calls, take notes, and sketch some aspects of the deal. In particular, in the field of international business, there is the practice of writing a 'letter of intent' (also called LoI), in which to try fixing some points on which an agreement has already been reached, highlighting others that , However, are still to be defined. Mutual benefits, rights and obligations of the parties and the price of the deal are thus outlined in a document, usually very simple and slim, which is called the "Memorandum of Understanding" in International Business Law and which is a sort of reminder to the actual conditions of the contract that will be concluded. The M.o.U. is, in short, the crystallization of negotiations, focusing confidently on meeting the will of future contractors on some of the profiles of their negotiating action, especially in cases where they do not intend to immediately elaborate detailed clauses.

Sometimes the M.o.U. It also contains references to people participating in the preparatory meeting, or expose the calendar of meetings or point out steps that are still to be evaluated by the parties. Indeed, often the parties draw up a synthesis of their future agreement, without wishing to be bound together, as if to protect themselves from over-responsibility.

Except that the constraint was expressly excluded by them, the M.o.U. You may have - in the event of a future dispute, unlike what is in Italian law for c.d. "Minute" or "punctuality" of the contract - a specific binding relevance to those points of negotiation from which it appears that there was already, even in part, a core of agreement: in which case the rest of the contract will come As is usually the case, reconstructed according to the general principles of international trade, that is to say, according to lex mercatoria, completing the gaps left by the parties. Indeed, in M.o.U. They mostly fix the subject and the economic conditions of the negotiation, postponing later (the closing) the determination of the discipline of the ancillary aspects of the contract.

Where the text appears vague and deliberately ambiguous, then it is faced with a "letter of comfort", that is, a document that shows that the parties have aimed at creating only a mutual ethical persuasion, without wanting at all to legally oblige the ' One toward the other. There is even a weaker form of letter of comfort, which is called the letter of awareness, if there is only the exchange of a statement of interest to contract, a maximum availability to the comparison, and nothing more. The M.o.U. - in Italian also called "memorandum of understanding" and in the Common Law countries, also heads of agreement, is a recognitive function of the commitments that the parties, with more or less uncertainty, are already considering to take and constitute evidence .

However, it often happens that M.o.U. of an international trade agreement contains the 'subject to Board approval' clause. Does it mean that the effectiveness of the cartel, already achieved in all its aspects, is subject to the approval of the Board of Directors? In such cases (also referred to as "subject to clause", let us also consider the subject of the "subject to finance" clause or the "subject to contract" clause or the equivalent "subject to the formation of written contract" The agreement is in writing), the agreement is valid but its effectiveness is subject to the suspensive condition of ratification (by the corporate body to this Member) or, respectively, for the approval of the financing (by the intermediary Credit choice) or the final drafting of the text of the agreement and however, at mid-term, none of the parties can withdraw from the intent and even the one who has to act (for nothing-buy, for example) is required to do so with the utmost diligence And correctness, even to failure. Obviously, in order to remain in the cases mentioned, the corporate body and the bank retain fully the unconditional approval right, but if it does not, it is not excluded that there may be consequences for the party that could benefit from the condition if 'The other party encounters the incident and claims the protection of its rights.

In the negotiations on cross-border trade, therefore, the "golden rule" is always to be assisted by an attorney who knows how to understand the delicacy of the negotiation phase by acting accordingly without leaving it to the case or, worse, ambiguity and/or the aptitude of its contractual counterparty.
To take care at this specialist issue (and many others matters), it has been dedicated the Master's degree on International Business Law, by the Proff. Santosuosso and Vattermoli, attended by the lawyer Salvatore Frattallone.