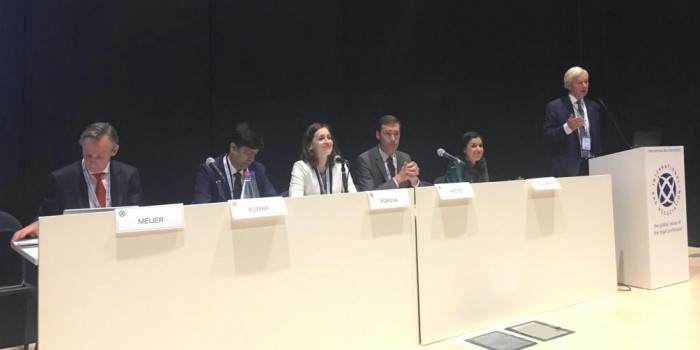 Lawyers can choose to swim against the political tide and support global harmonisation. The
UNIDROIT Principles are one of the most compelling initiatives in law.
One advantage the Principles have is that they are soft law, and as such have been enjoying steady and increasing use.

“I believe in harmonisation,” says Willem Calkoen of Dutch firm NautaDutilh, and coordinator of the IBA working group on the UNIDROIT Principles.

“It should be an aim of all international lawyers to try to harmonise. If my Dutch client goes to India where the law is very different, they get nervous; differences in law are a  complicated hindrance in international business.” This morning, the IBA will present the results of a vast exercise to strengthen and promote one of these harmonisation efforts: the UNIDROIT Principles of International Commercial Contracts, also known as the Principles or UPICC.
The Principles first emerged as a concept in the 1970s with quite a romantic vision of creating a global lex mercatoria. An analogy in language might be something like a lingua franca, or extending that idea globally, a legal version of Esperanto.
They were first published in 1994, with subsequent editions in 2000, 2010 and 2016, and offer a set of ideal definitions for contract provisions such as good faith, fairness, hardship, specific performance and termination for long-term contracts.
The best way to understand the Principles is through case examples, which is exactly what the IBA has been busy providing when a team of 42 lawyers analysed 250 cases worldwide which cited UNIDROIT Principles. This research will be presented today.
If a party from Paraguay contracts with a party from Vietnam, they must agree on one of the contract laws, which can be tricky, or they can choose a neutral law (English or New York law), which neither party knows as their own. In this circumstance the Principles offer an alternative.
Another applicability is well illustrated by a 2009 decision from the Supreme Court of Belgium over a cross-border contract for a supply of steel rolls. Market fluctuations drove the price of steel up, leaving one party at a big disadvantage. This party wanted to exit the contract by claiming hardship.
Belgian law did not have a definition of hardship so the court fell back on the Vienna Convention (GISC), w h i c h  d o e s n ’ t have a definition of hardship either. The Court finally turned to and applied the definition in the Principles.
The Principles can fill gaps, help interpret contacts and smooth differences between domestic laws. “Lawyers at the IBA work every day on differences between laws,” says Calkoen. “You could say it’s nice for them because it makes it more complicated and means they have to give more advice. But busy lawyers don’t like complication because they like to solve things quickly and practically.”
How do they work? One of the weaker areas in the Principles is that because they are forward-thinking (they have been developed as an ideal and not only through case law) they don’t have an easily-accessible complete case history yet.
In answer to this, an IBA working group of 42 practitioners from 25 countries worked together to summarise 250 court and arbitration cases where the Principles were applied as the rules of law governing the contract, or used to interpret and supplement the applicable domestic law. The working group has also produced 28 country reports.
This undertaking is notable in itself. “People said it would be unmanageable, but low and behold we have produced a neat document because of the enthusiasm of IBA members.
It’s the only place where you would ever be able to do this,” says Calkoen.
By illustrating how the Principles are applied the group hopes that they can be taken up more readily, especially by countries such as the US and UK.
At the moment, the Principles are used most in countries which are developing their legal systems. Paraguay, for example, has about 30 cases which have used the Principles.
The English Supreme Court has relied on UNIDROIT once. Countries like Russia and Australia have a rich UNIDROIT case history, while France leaned heavily on the Principles when it reformed its commercial code in 2015. One advantage the Principles have is that they are soft law, and as such have been enjoying steady and increasing use, with a creeping influence globally. As with the 1992 Cadbury Code on corporate governance, the soft law approach, suggesting an ideal practice, can gradually succeed by influence.
The Principles differ from other harmonising attempts. The EU for example issues directives, compelling member states to adopt specific acts and rules. In the US, where each state has its own laws, there is the Restatement of the Law, which attempts to bridge differences between state laws in cross-state cases by taking inspiration from all state laws. This is an approach that looks back to case law. Calkoen believes that the soft law approach is the best way to contribute to the harmonisation of laws.
The future According to Gerard Meijer, president of the board of the Netherlands Arbitration Institute, the Principles already “serve as a valuable source of comparison and reference”. They assist “in reaching the best solution in international disputes” and serve as a benchmark “when discussing legal issues with foreign lawyers under a certain law”.
This neatly pre-packaged contract law, available to anyone who wishes to take it up, and developed internationally outside of any domestic law system, may well have a big impact 20 years from now. It will edge its way into domestic legal systems and influence interpretations of international conventions and transnational law.
This session will help it on its way by analysing real international transactions and the way they were litigated in court or in arbitration through the lens of the Principles.
The panel will be co-chaired by Simon Hotte of FIDAL, France and Ina Popova, of Debevoise & Plimpton, US. Other speakers include Karina Goldberg of Ferro Castro Neves Daltro
& Comide Advogados, Brazil; Sanjeev Kapoor of Khaitan & Co, India